For some time now the Linux kernel has been supporting a capabilities(7) based permission control model. In theory this allows assigning fine-grained permissions to processes so that processes that previously required UID 0/root permissions don’t need these any more. In practice though, uptake of this feature is relatively low, and actually trying to use it is hampered by confusing vocabulary and non-intuitive semantics.

So what’s the story?

Capabilities can be bestowed on execution (similar to how SUID operates) or be inherited from a parent process. So in theory it should be possible to, for example, start an Apache web server on port 80 as a normal user with no root access at all, if you can provide it with the CAP_NET_BIND_SERVICE capability. Another example: Wireshark only needs the CAP_NET_RAW and CAP_NET_ADMIN capabilities. It is highly undesirable to run the main UI and protocol parsers as root, and slightly less desirable to run dumpcap, which is the helper tool that Wireshark actually uses to sniff traffic, as root. Instead, the preferred installation method on Debian systems is to set the dumpcap binary up so that it automatically gains the required privileges on execution, and then limit execution of the binary to a certain group of users.

This is the most confusing part, because a) it doesn’t behave intuitively in the “just like suid-root” mental model, and b) uses the same words for completely different functions.

Conceptually capabilities are maintained in sets, which are represented as bit masks. For all running processes capability information is maintained per thread; for binaries in the file system it’s stored in extended attributes. Thread capability sets are copied on fork() and specially transformed on execve(), as discussed below.

Several different capability sets and related variables exist. In the documentation these are treated as somewhat symmetrical for files and threads, but in reality they are not, so I’ll describe them one by one:

Based on these definitions the documentation gives a concise algorithm for the transformation that is applied on execve() (new and old relate to the thread capability sets before and after the execve(), file refers to the binary file being executed):

This simple definition has some surprising (to me) consequences:

I’ve tried to summarize all the possible paths that a capability can take within a Linux thread using capset() or execve(). (Note: fork() isn’t shown here, since all capability information is simply duplicated when forking.) 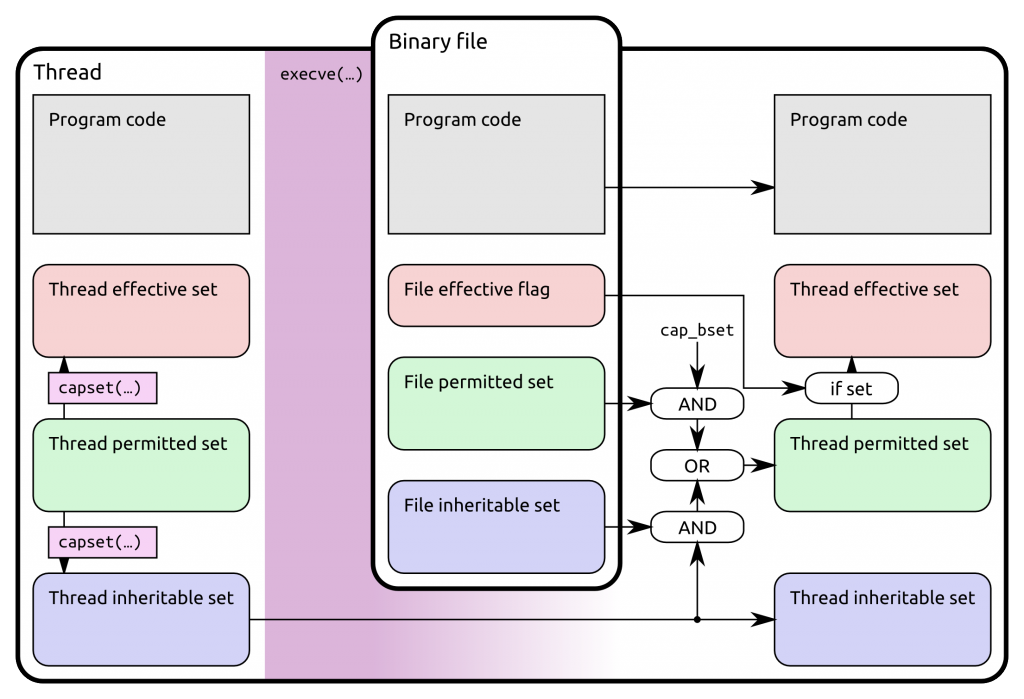